skip to main | skip to sidebar

I have just completed a painting in honor of my dear friend Zheng Cao.  She was an opera singer with a devoted following around the world, and she died tragically young earlier this year.  In addition to her amazing musical talent, she was a sparkling presence who enchanted everyone she met.

The painting is titled "Portrait of Zheng Cao (with Mozart and Frederica von Stade)."  It is a tribute to Zheng’s artistry and shining spirit.   It is also a tribute to the extraordinary friendship between Zheng and the great mezzo soprano Fredericka von Stade (Flicka).

The painting features two objects that are emblematic of the bond between the two mezzos.  The score of Le Nozze di Figaro was presented to Flicka when she first sang the role of Cherubino at Paris Opera in 1973.    And the buckle on the shoe is one of a pair worn by Flicka each time she performed Cherubino.  Flicka passed the torch to Zheng by giving her the score and the "Cherubino" buckles, which Zheng faithfully wore in each of her own Cherubino performances.

The last object in the painting is a ribbon -- symbolizing the ribbon treasured by Cherubino as a memory of his beloved.   It is red for Zheng, and it has no beginning and no end. 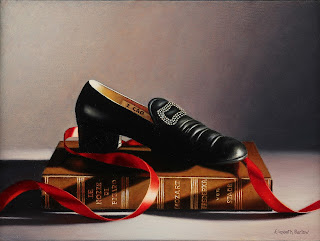 Posted by Elizabeth Barlow at 3:05 PM No comments:

Elizabeth Barlow
“One of my earliest memories of art is watching my father, Philip Barlow, at the end of a long day, sitting and pondering a new painting he brought home from his studio. Did it “say” what his mind’s eye wanted it to say? I took some creative detours – acting and writing – before finding my voice as an artist. I studied with amazing teachers and mentors in San Francisco, at UC Berkeley and the Art Students League of New York, but I have been influenced most by the work, words, wisdom – and the powerful “mind’s eye” of my father.